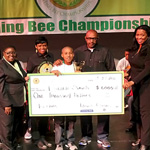 In front of a capacity crowd and local television cameras, the African-American National Spelling Bee Championships (AANSBC) were held on Saturday, February 27, 2016 in Heinen Theatre at Houston Community College, Central Campus. This is the 6th year of the event, which is held annually in the Houston area.

The AANSBC began as a non-profit organization in 2010, with a mission to “train students in grades 6-8 in decoding and spelling techniques to enable them to expand their literacy skills and knowledge, improve language development and increase reading and writing levels.” The AANSBC is not affiliated with other regional or national spelling bees, and draws its participants from middle school students in the Greater Houston area.

This year, a total of 36 contestants competed, though the numbers slowly dwindled with each succeeding round of the competition. After a short delay and review of the video recordings to check for spelling accuracy, a tough final round ended in the crowning of the 2016 AANSBC champion, Isaiah Samuels, a 7th grader from Northeast Christian Academy. In addition to a standing ovation provided by the theater full of volunteers, sponsors, family members, supporters, and community members, each of the participants was given a certificate for participation and a gift bag provided by the event sponsors. The top finishing contestants additionally received cash prizes, with a $1,000 check presented to precocious Isaiah.

Local television anchor Chauncy Glover of KTRK TV-13 (an ABC affiliate) was the master of ceremonies for the event and former KPRC-TV2 (an NBC affiliate) anchor Mary Benton pronounced the words to be spelled. Judges for the competition were Judge Elaine Palmer, Judge Hazel Jones and Attorney Michael Harris.

After the champion was crowned, the AANSBC leadership thanked the participants, supporters, and sponsor organizations, and invited everyone to come back for another year. The founder of the spelling bee, Robert L. Garner, announced a lofty set of goals for 2017, including having the First Lady Michelle Obama participate in the championships as a celebrity judge or master of ceremonies.

If you know of any students in grades 6-8 in the Houston area who would like to participate in the 2017 AANSBC, they can register on the website www.bee-aboutit.org. The deadline for the next competition will be in early January 2017. If you are interested in becoming a sponsor, information about sponsorship and donations for the bee can be found on the same website.

In addition to the annual spelling bee, the AANSBC holds adult workshops for parents, teachers, and volunteers to help prepare and motivate the students. The organization also holds Saturday study sessions and spelling ‘pep rallies’ to get the potential contestants excited about participating in the program.

Be A Diversity Ally

From Diversity to Inclusion: 4 Tips for a More Inclusive Work...