At 32-years old, Dr. Foyekemi (Foye) Ikyaator made history in December 2015 by opening Life Savers ER, a free-standing 24-hour emergency room in the Northwest Houston area. One of the first of its kind in the nation – a free-standing emergency room owned and operated by an African-American female – Lifesavers ER has provided needed medical care for local residents since its opening.

Most stand-alone emergency rooms are owned by hospital systems or doctor groups. Few are owned and operated by females or African-Americans, and even fewer by African-American females. Dr. Ikyaator takes pride in providing a service to members of the community who may not otherwise have access to quality medical care. She also has an eye towards being a successful business woman.

“I’ve always been interested in business and being an entrepreneur in medicine. It is possible to give back to the community, empower people, and care for their health while still being a business woman,” she said in an article published in Cypress Creek Mirror, a Houston area newspaper. 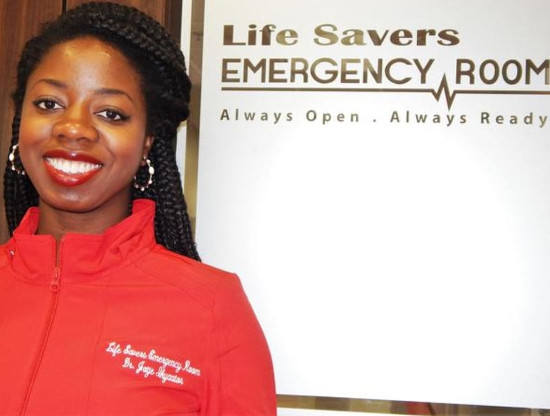 Dr. Ikyaator is a native of Nigeria, though she moved with her family to the United States and the Atlanta area when she was 8 years old. Her father was a veterinarian and research scientist, so she and her two older brothers were exposed to science and medicine at a very early age. Dr. Ikyaator is a graduate of the University of Wisconsin School of Medicine and Public Health and completed her residency at the Emory School of Medicine and Public Health in Atlanta. She also gained experience at St. Luke’s Health System in the Houston area.

Dr. Ikyaator has been the subject of many television, social media, and print stories since opening her facility, in the United States as well as in Africa and her native Nigeria. Her focus however, is on helping people, not becoming a celebrity.

“I’ve had several role models growing up who were minorities, women, and people who fought against a lot to be able to accomplish great things,” Dr. Ikyaator told Cypress Creek Mirror. “I think being able to serve as a role model is really a direct reflection of what I’ve experienced with the role models I had growing up.”

After a soft opening in December 2015, the official ribbon cutting took place in January 2016. “We want to be integrated in the community,” Dr. Ikyaator explained to Cypress Creek Mirror. “We want to be the people’s first resource when they have any urgent medical care need.”